For most of human existence the espresso martini was not a thing. So what a delight it must have been when in 1983, it was created.

Legend has it that the late British bartender Dick Bradsell (who also invented the Bramble) was asked for a drink that will “wake me up, and f*** me up” by an upcoming, now famous but never-named model.

Bradsell combined fresh espresso, vodka and coffee liqueur into a shaker (unfortunately Quick Brown Fox wasn’t around then), shook it with ice and then served it into a martini glass with three coffee beans to garnish. The Vodka Espresso was created and Fridays have never be the same since.

Traditionally the term “martini” should be reserved for a cocktail made with gin and vermouth. A vodka martini is acceptable to many but ‘espresso martini’ is a name those purists will sniff at. I am not one of those purists but I acknowledge their reasoning. 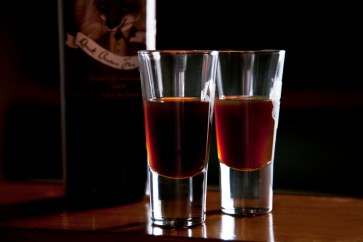 Any good cocktail will have balance, so while there are many iterations of an espresso martini the first goal is to maintain balance. Espresso is intense and generally perceived as bitter and vodka is sharp. Both of these ingredients can be balanced with sweetness. If you just mixed vodka and espresso the result wouldn’t be pleasant – so we must bridge those flavours and that normally comes in the form of a coffee liqueur, and/or honey or sugar.

Bartenders can opt to switch the vodka for another spirit: golden or white rum, tequila, vanilla vodka, even whisky. Even switching the coffee liqueur to a different liqueur. Any decision requires tweaking the recipe. For example some golden rums, and vanilla vodka are sweeter than vodka so they may opt for less sweetness from other sources.

Here’s a video from Sai Charan of the bar Rich Heart in Auckland’s CBD showing us how he makes his (perfect) espresso martini with Rum Diplomatico and Quick Brown Fox:

The garnish is important because well, it looks great. The typical garnish of three roasted coffee beans represents health, wealth and happiness. You could also consider a sprinkling of spices or chocolate.

Here’s a very simple espresso martini you can make at home, and use as a base for further experimentation:

Pour all ingredients into a shaker, top with ice and shake hard. Double strain into a chilled martini glass and garnish with three coffee beans.

A fact on this feature image.

There were a number of articles published after the death of Dick Bradsell, and I couldn’t help but notice the image used on many of them was my own! A Google search revealed this image had been used over 1000 times!

The cocktail was created by Jamie Hughes at Toast Bar in Dunedin and the photograph was taken by Emily Hlavac Green. They really did create a delicious looking cocktail! I really should have put a Quick Brown Fox bottle behind the cocktail eh… The lessons we learn…

Read more about Bradsells legacy and the vodka espresso here

See my image in action in WJ London Lifestyle

What’s the best espresso martini you’ve ever had?

Founder of Quick Brown Fox Coffee Liqueur and Harpoon Cold Brew. Based in Auckland, New Zealand
%d bloggers like this: